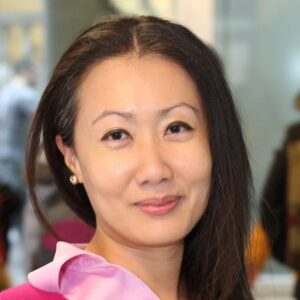 Cathy joined Pacific Northwest National Laboratory (PNNL), one of the ten United States National Research Laboratories in 2000, operated by Battelle Memorial Institute for the Department of Energy (US), as a research engineer and then as senior research scientist. She led the catalyst development task in an intensive effort of commercializing microreactor technology for conversion of natural gas to liquid fuel. She also involved in developing materials and catalytic conversion technology for NOx exhaust emission control, on-anode reforming in solid oxide fuel cell, and H2 production.

Cathy pursued a doctorate degree at the University of California, Berkeley from 2005-2010 under the tutelage of Professor Enrique Iglesia. Her thesis work focused on elucidating the molecular mechanisms for natural gas conversion on supported Group VIII nanosized metal clusters. Specifically, she applied isotopic and kinetic methods to interrogate the kinetic responses and dynamics of the surfaces during chemical reactions. In a close collaboration with Professor Matthew Neurock at University of Virginia, she applied density functional theoretical methods to probe the structures and energies of molecules along the reaction coordinate.

Cathy joined the Department of Chemical Engineering and Applied Chemistry starting May 2011 and is now an associate professor of chemical engineering. She is a Canada Research Chair (Tier II) in Advanced Catalysis for Sustainable Chemistry and is recognized as an Emerging Leader in Chemical Engineering, a national level recognition for her vision and leadership in catalysis, within Canada and internationally. She is a recipient of the NSERC Discovery Accelerator Award, Humboldt Research Fellowship, Ontario Early Researcher Award, and Imperial Oil University Research Award. She also received the Bill Burgess Teacher of the Year Award for Large Classes. Cathy is a judge for the global NRG COSIA Carbon X-prize, a $20 million CAD prize for the development of carbon dioxide utilization technologies, and she represents Canada at the Commonwealth Science Conference on low carbon fuels.

Mechanistic role of the proton–hydride pair in heteroarene catalytic hydrogenation

Consequences of surface oxophilicity of Ni, Ni-Co, and Co clusters on methane activation